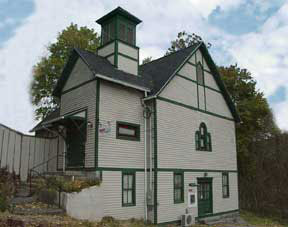 Originally built in 1902, the theatre served as a Black Adventist Church until membership dwindled and it was disbanded in the 1960s.

In 1973, a group of artists formed The Creative Arts Center of New Milford, Inc. with the goal of presenting not only theatre but a variety of artistic events.

As time wore on, "The Little Theatre" focused more and more on what it did best and in 1992 was re-named TheatreWorks to more accurately reflect the company and its mission.